The name alligator comes from early Spanish explorers who called them "El legarto" or "big lizard" when they first saw these giant reptiles. Today, Louisiana and Florida have the most alligators, over one million wild alligators in each state with additional alligators on farms.
​
Reptiles are cold blooded animals, which means that their body temperature is regulated by the temperature of the environment around them. This is why alligators are seen basking in the sun, trying to regulate their body temperature. Because alligators are cold blooded their body rates are slowed down during the winter months to the point where they can no longer catch or digest food efficiently. For this reason alligators enter underground holes and remain dormant through the winter months.

Alligators range from central Texas eastward to North Carolina. Louisiana and Florida have the highest alligator populations, approaching 2 million. Although alligators can be found in ponds, lakes, canals, rivers, swamps, and bayous in Louisiana, the highest populations occur in coastal marshes. Of the almost 4.5 million acres of alligator habitat available in Louisiana, coastal marshes account for over 3 million, followed by cypress-tupelo swamp (750,600 acres), Atchafalya Basin swamp (207,000 acres) and lakes (32,105 acres).

Alligators are about 8"-9" in length when they are hatched from eggs. Growth rates may vary from 2" per year to 12" per year, depending on the type of habitat the alligator is living in and the sex, size and age of the alligator. Growth rates slow down as the alligators become older. Male alligators will grow faster and larger than females. Females can grow to approximately 9' in length and 200+ pounds. Males can grow to approximately 13'+ in length and attain 500+ pounds. The record alligator taken in Louisiana was 19 feet 2 inches.

Alligators live about as long as humans and average 70 years, but can be 100 years old, if they can survive a difficult life which starts with biting and fighting that never ends.

The breeding season in April and May begins a life cycle that evolved from prehistoric times. A giant male or "bull" alligator begins bellowing in the spring to attract females and warn other suitors to stay away. For two months every year alligators fight to see who gets to court the female or "sow" alligators. Alligators can be vicious fighters during breading season. Alligators will eat almost anything, including each other; they bite and fight to eat, court, defend, or protect their territory.
​
The winners are sometimes badly scarred and alligators with missing legs, bobtails, or blinded eyes are not uncommon. Still, they mostly shy away from humans unless they are fed, challenged, or foolishly approached or harassed.

Alligators bask in the sun to increase the heat of their cold-blooded bodies before returning to the water to cruise and stalk prey. They will hunt anytime, but particularly at night where they are well adapted with a good sense of smell and vision in the darkness. A light flashed on an alligator at night will reflect a blazing red eye that does not blink with charity to anything within range of its formidable jaws.

As powerful and dangerous as alligators can be, they are strangely very good mothers. The female will defend her eggs and hatchlings from predators or intruders with a hissing warning backed up by chomping jaws and thrashing tail.

She will build a nest in June or July each year of marsh vegetation piled in a mound several feet high and 10 feet across. Here she will lay up to 60 eggs with the average clutch being about 35 eggs. The decaying vegetation creates heat to incubate the eggs that will hatch in about 65-70 days with 8-9 inch hatchlings. Interestingly the temperature of the nest determines the sex of the hatchling. 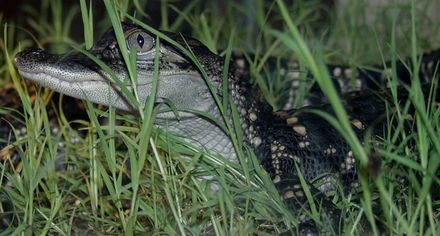 The hatchling develops an "egg tooth" on top of its snout to slit open the egg. It begins to chirp even before it has emerged from the egg. Soon the whole clutch is chirping to signal mother alligator it's time to leave the nest. If an egg doesn't hatch properly, the female may gently break the egg in her massive jaws to help the hatchling get out, and may even carry some hatchlings to the water in her mouth. There in the "guard pool" the young gators remain for the next 6 months under the watchful and protective eye of the female. The young may stay near the nest site for a couple of years. During the winter, alligators will enter underground holes and remain dormant. As spring arrives, alligators emerge from winter dormancy and the annual process (mating, nesting, winter dormancy, etc.) begin again.

Hatchling alligators are normally black streaked with pale yellow stripes down the flank. White, or albino alligators are rare. If predators don't get the easily seen white hatchling, then sunburn could be a problem. Rare, blue-eyed, "leucistic" white alligators can be seen at Audubon Zoo and the Aquarium of the Americas in New Orleans.

Young alligators are called hatchlings and begin snapping up insects soon after birth. They graduate to minnows, then frogs, birds, mammals and eventually to anything that can't eat them first. And a lot of other animals eat alligator hatchlings, particularly herons, egrets and even largemouth bass.

The mortality is high and only some hatchlings will survive to become breeders at 6 to 8 feet. The rest are victims to other predators or natural mortality. Alligators grow about a foot a year up to 6 feet and females rarely grow above 9 feet while males will grow to 10 feet and more. 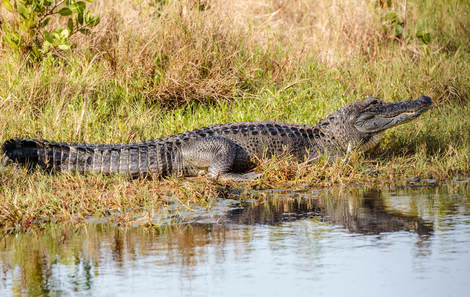